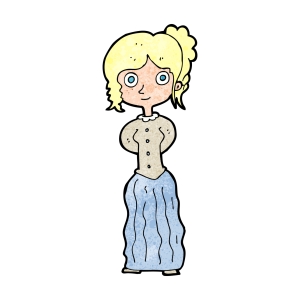 One night, after one of my long tulmutous days, I sat down at the laptop to browse on Facebook for a bit just to sit in shock and awe as my newsfeed was blown up about a very pretty mother who found herself convicted to no longer wear yoga pants. Has anybody else viewed this article? How could you not? It quite literally comprised the first 10-15 posts in my newsfeed. I really couldn’t care less as it is not my business what people are choosing to wear and the mother certainly was not trying to impose her views on me. I am so not judging this! It did, however, get me thinking, if these lustful men with wandering eyes are looking at her, perhaps they are also looking at me; I thought back to earlier that morning: there I was in the grocery store, wearing a hoodie and sweatpants, frazzled hair up in an untidy bun, dark circles under the eyes blazing, all six children in tow and as I thought about the scenario I became fearful that perhaps these lustful men were after me too!! Collecting myself, I asked my husband if he ever had lustful thoughts about other women. He admitted that sometimes he found himself wildly out of control, particularly when we were at Wal-Mart as women tend to dress as though Halloween could be everyday of the week. He said that some of these ladies who sport their undersized tank tops that expose voluptuous muffin tops entice him to ponder thoughts that would be better left to those who are in need of Catechistic exorcisms and the like. He also found that his arousal became increasingly notable upon the absence of dentition. As I stared in the mirror at my own muffin top, with protruding stretch-marks and all, it made me feel vulnerable: here all this time has gone by, with all of these men: tongues hanging out, drool slowly creeping to the floor, and lil’ ol’ me: completely oblivious! YIKES! It was then, that I resolved myself to wearing heavy plastic tarps and sackcloth complete with hemp sandals. I knew that even though not every woman would understand, my actions could possible raise awareness that these perverted men who cannot seem to control themselves long enough to shop at a supermarket for a simple gallon of milk could be anywhere, and they could be anyone! Imagine: your plumber, your accountant, neighbor, co-worker, or what about that creepy guy who sits in the small booth at gas stations and always seems to remember your name even though you have no clue what his is? I woke up the next morning, my resolve stronger, I eventually realized that with all of these creepers among us, I could not leave my house again. These men would then need to go out of their way to come to my home in order to lust after me. And then I finally thought, with my six screaming kids, ever increasing crows feet, and thinning hair….They Just Might!  🙂